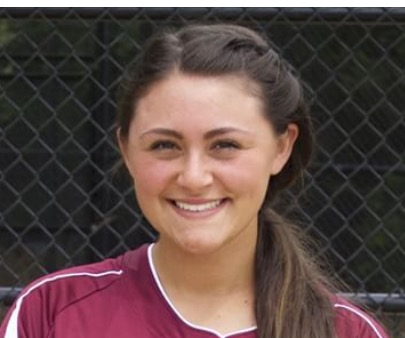 Melissa Triolo has the same routine for every softball game she plays for Walt Whitman High School.

The 17-year-old second baseman from Melville, standing at 5-foot-7, puts on her socks, shorts and uniforms bearing the number 15, pants and then belt. But her Boombah cleats remain off until she gets to the field. She does it for superstitious reasons, she said.

And the tack may just be paying off. The Wildcats’ senior co-captain was awarded All-Conference honors last season and this season is batting .354 and slugging .492 to help the Wildcats earn a playoff spot.

And, last week, she was informed that she is the recipient of the Town of Huntington Softball Hall of Fame’s annual softball scholarship.

Steve Henry, a committee member of the hall, surprised Triolo with the award during her team’s Senior Day game against Northport on May 8.

“Her passion for the game is probably one of the biggest things that stands out,” Henry said. “You don’t do it unless you really love it because it takes a lot of sacrifice.”

Triolo said she was “happily surprised” to earn the $500 scholarship, which she intends to this fall put towards her continued education at SUNY Geneseo.

Her devotion for the game was, perhaps, most evident during her junior year, when her season was cut short by a broken left arm. During the offseason, Triolo said, she worked tirelessly to build back her strength so that she could be ready to go for her senior year.

Ralph Miranda, Whitman’s head coach, has been coached Triolo through two of her four years at the varsity level. He called her a “student of the game” and said she takes her craft “very seriously.”

Miranda added, “She’s always thinking, and that’s one of the most important aspects of this game. You have to know what you’re going to do next.”

And Triolo knows what to do in every situation, “whether she’s in the field, at bat or on the bases. She has a very good game sense in all aspects.”

Throughout her softball career, Triolo has been regarded as a versatile infielder. She played third base last year, but made the move to second in 2017. In both positions, Miranda said, Triolo has showcased good range, and the ability to handle infield plays very well. At the plate, she’s a very selective hitter with a great eye who knows when to swing, and when not to swing.

Off the field, she’s regarded as caring, said her mother, Benizia, adding that she and Triolo’s dad, John, are very proud of their daughter.

Triolo said she was first inspired to play softball for by her father, a lifelong baseball fan. After watching her older sisters Sarah and Emma hit the diamond, she eagerly awaited the opportunity to do so herself.

“My dad would always take me out playing T-ball and I would see how far my sisters would hit it. I wanted to be just like them,” she said, adding that her dad had her swinging a bat since she was 3.

When she turned 5, Triolo’s softball journey officially began as she joined a little league team at St. Hugh-St. Elizabeth. By the time she turned 12, she was suiting up for travel teams. She’s played for three of them, including the Long Island Express, which she’s still a member of today.

Ken Passante, her coach on the Express for the past four years, said that every time Triolo steps on the field, whether it’s for a game or practice, she puts in her blood, sweat and tears. He’s enjoyed every minute coaching her, he added.

She’s “an incredible young lady who also happens to be a very talented softball player and is the leader of our group,” Passante said. “I have been blessed to have some great people play for me over my 30 plus years of coaching and [Triolo] sits right among the best of them.”

Triolo also played both volleyball and soccer when she was younger, but stopped to give her full attention to softball. She favored softball because she feels it’s more of a team sport, and she likes that.

“Softball has given me so much,” she said. “It’s given me my best friends. It’s given me a positive attitude, and the knowing that no matter what obstacles I face in life, if I give my all, I can get through them.”

Sarah Glaser, 17, of Melville, one of Triolo’s teammates at Whitman, said she’s a strong player who contributes to the team both on and off the field. Glaser said Triolo typically gives the girls pep talks after tough losses.

Another teammate and co-captain, Taylor Epstein, said Triolo is a clutch player who comes up big when the going gets tough.

“She’s always focused on the game and what she can do to help the team,” Epstein, 18, of Huntington Station, said. “Even if people are down on themselves, she tries to keep us up no matter what the score is.”

One game in particular came to mind, Epstein said. Earlier this season against Connetquot the Wildcats were down after making some errors and enduring some tough breaks. They ultimately fell, 6-4, but Triolo wouldn’t quit.

“She started us back up. She was the first one to hit and then everyone started hitting and making plays. It just came together,” Epstein said.

After this season, which was still ongoing as of deadline Monday, when the Wildcats were slated to play their first playoff game, Triolo plans to attend SUNY Geneseo and continue her softball career. She also wants to major in either special education or early childhood education.

She’s going to miss her Wildcat teammates, many of whom she regards as her best friends.

“My freshman year, I was quiet on the varsity team, but as I got older I opened up to my teammates and it made a better experience,” she said. “My coach has seen me grow up and become the player I am today, and I’m really going to miss it.”

Triolo, a student with a 4.0 GPA, is also active off the softball diamond. She participates in many organizations, such as Project Hope, and the school Booster Club and PTA. She said she participates in community service work because her peers are very important to her and the opportunity for them to continue their education is important as well.

“I want to give back to these programs because they’ve given me so much,” Triolo said.

In June, on a date yet to be determined as of deadline, Triolo will be presented with her scholarship check and a plaque during Whitman’s senior athletic awards dinner.