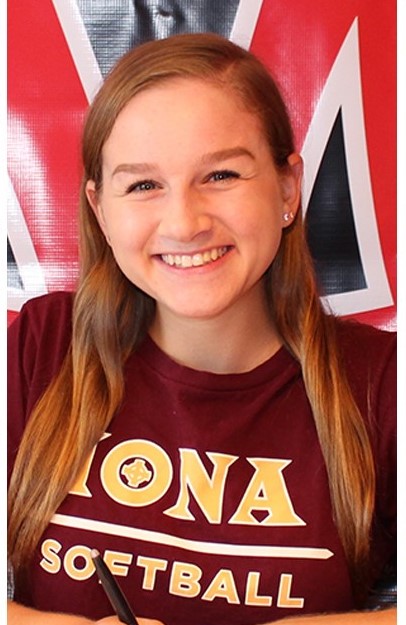 “We are excited to announce the signing of four quality student-athletes who come from all over the country (NY, PA, FL and CA). My coaching staff and I worked hard to bring in this speedy, athletic and versatile class,” states coach Inouye.  She continues, “We feel that Kayla, Natalia, Sam and Maggie will help our program continue to achieve success within the MAAC. I look forward to seeing them compete and succeed on and off the field as Iona Gaels.”

Kayla Hujber was a four year varsity starter at Center Moriches High School for coach Rich Robert and currently plays summer travel ball for the Long Island Express for coach Ken Passante.  While at Center Moriches, Hujber was earned All-Division honors one time and twice took home All-County and All-State selections.  She helped her team to two regional final games with a career batting average of over .500.

Coach Robert calls Hujber a run scoring machine, citing how in 2016 she reached base safely 60 times and scored 45 runs with driving in 30.  In 2017 she served as a team captain and proceeded to lead her team in home runs, runs scored (45), stolen bases (15), and runs batted in (31).  Through four varsity seasons, Hujber scored a total of 152 runs while collecting over 50 extra base hits and over 50 stolen bases.

In addition to excelling both on the diamond and in the classroom, Hujber was a four-year varsity tennis player and a two-time All-League selection.

Kayla Hujber: “I chose Iona because it has a great sense of community and is a strong business school with many internship opportunities. Right when I stepped foot on campus I felt at home and I knew it was exactly where I wanted to be!”

Coach Inouye: “Kayla is a quick and versatile player who can play in the outfield and infield. She is an athletic and gritty player who plays the game hard.”